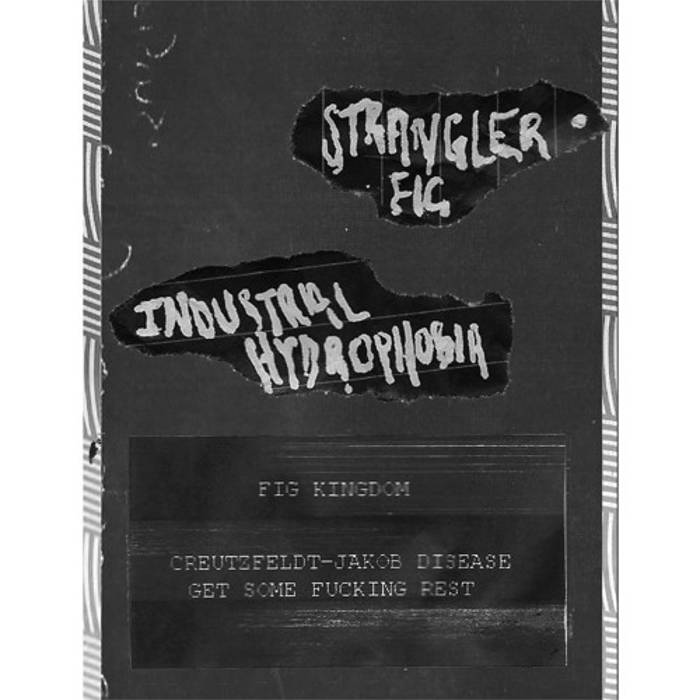 My half of a split tape release with Strangler Fig.

Can be heard here: soundcloud.com/minimalimpactnoise/sets/strangler-fig-industrial

"Two very opposite sides of the noise spectrum presented here, in an ultra limited edition of 10 on recycled cassettes (my copy is recorded over a Sammy Davis jr record), from Brisbane Australia label Minimal Impact Noise. Strangler Fig play vacant eyed, mouth drooling noise using glacially paced pulsations of static wash and subtle chiming instrumentation, while Industrial Hydrophobia flip the switch and kick out an intense thrash jazz jam with piano, sax, and huge distorted blurts of noise. About ten minutes of music here all told, and rather than each claiming one side for themselves the whole thing plays out on one side. It’s an effective and palatable take on the idea of a split release, nicely pairing disparate approaches to the world of harsh sounds. There’s something very rewarding about following up a slow burner song with a high intensity, energy filled track, it’s the album equivalent of waiting for the mosh riff in a hardcore song.


If someone were to grab you by the throat and demand to know what’s up with noise, you could put on this release and it’d just about portray the breadth of variance in the genre in brief without overstaying its welcome. Between the two, I prefer the mind melting grind of Industrial Hydrophobia, who, further research details, have one other release of sick, disgusting quality, which seems only available on Youtube format that hits on a more zonked sound than the fury of the take on this tape. Worth looking at. This split’s (obviously) sold out from the label, but the curious can listen here."